Arctech, a leading manufacturer and supplier of solar trackers, fixed-tilt structures and BIPV systems, showcased its flagship 2P tracker, SkySmart II, as well as the integrated BIPV system at the SNEC 2021, which is one of the world’s largest solar exhibition in Shanghai China, on June 3rd-5th. Arctech also launched the first-of-its-kind wireless-synchronized seasonal tilted mounting system. 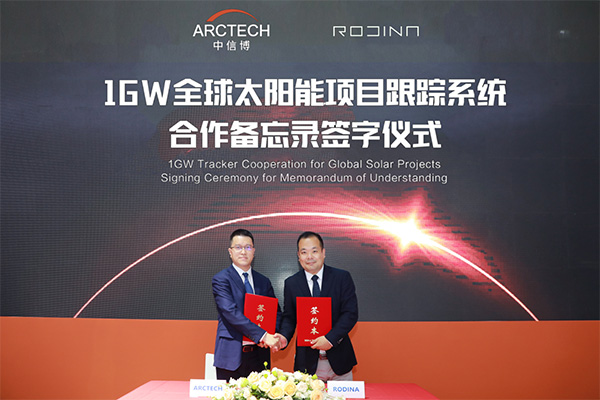 At SNEC 2021, Arctech has signed a Memorandum of Understanding（MoU）with Rodina, a Ukraine-based energy corporation, to supply 1GW tracker products and project management for solar projects worldwide, which represent a breakthrough in the market expansion. According to the agreement, Arctech will deliver 1 GW trackers to Rodina’s projects in global markets, especially for the North America, Central Asia and Eastern Europe markets, in the next two years. Meanwhile, the both parties agreed to work together on the solar project management and O&M service scope in the future.

Founded in 2013, Rodina is headquartered in Kyiv, Ukraine, with overseas offices in Belarus, Kazakhstan and Turkey. Currently, it is the only European company with successful solar power projects in Ukraine, Belarus, Russia, Armenia, Turkey and Kazakhstan.

As of the end of 2020, Arctech had supplied over 32GW of tracking and racking systems to nearly 1,100 PV plants in 40 countries, based on its extensive sales networks in China, Japan, India, the U.S., Spain, Australia, UAE, Mexico, Chile, Brazil, Vietnam, and Argentina. It was ranked asthe world’s 4th tracking system manufacturer four years in row from 2017-2020 (source: IHS Markit and Wood Mackenzie).

“We are delighted to establish the cooperation with Rodina, a large multinational energy company. Both of us will take the advantage of each other's strengths and expertise and work together to explore more business models in order to speed up the business expansion worldwide! Arctech adhere to the business value of customer-oriented and remain Arctech operating internationally on a global scale to help more customers and partners achieve mutual benefits worldwide,” said Allen Cao, the General Manager of Arctech’s International Business.

Arctech (SSE-STAR: 688408) is a leading manufacturer and supplier of intelligent solar trackers, fixed-tilt structures and BIPV systems for utility-scale and commercial solar PV projects worldwide. As of the end of 2020, the company had supplied over 32GW of tracking and racking systems to nearly 1,100 PV plants in 40 countries, thanks to its extensive marketing networks including its offices in China, Japan, India, the U.S., Spain, Australia, UAE, Mexico, Chile, Brazil, Vietnam and Argentina.

With innovation and a customer-first philosophy in its DNA, Arctech is committed to offering industry-leading solar trackers and best-in-class services to boost energy yield for solar power plants and maximize returns for investors. For more information, please visit www.arctechsolar.com.