On Dec 16th, Arctech, the world's leading tracking, racking, and BIPV solutions provider joined hands with Energyear for one of the signature industrial events of renewable energy in Latam region to discuss the challenges and opportunities large-size PV module has brought to tracker manufacturers.

"When it comes to the factors considered for choosing a tracker, we normally need to compare the trackers in the aspects of financial performance and product reliability especially in harsh conditions. Latin America has rapidly evolved in tracker adoption. Countries that have quickly adopted this technology include Brazil, Argentina, Mexico, Chile and more recently Colombia. It was more or less a bumpy road because of the capex pricing of trackers, but plant owners now start to understand that tracker could help improve the reliability of the structure during the life of the plant significantly" said Guillermo Garcia, Regional Director of Latin America North at Arctech.

Signed contract of future delivery of 74MW trackers with IM2 Solar Chile Spa, Arctech is the key technology partner for the biggest developers in the Latam region, where it has a portfolio of close to 1.6 GW across the region. According to the report from Wood Mackenzie Power& Renewables, Arctech has continued to take the third spot in the Mexican market ranking in 2020. The sales momentum for Arctech's signature 2P tracker, SkySmart II, remains strong in the region, especially in Chile, Colombia and Argentina. The company is determined to unleash the potential of the uncapped market by introducing SkyLine II this year, the world's first 1P single-axis tracker equipped with pentagonal torque tube design and synchronous multi-point drive mechanism. 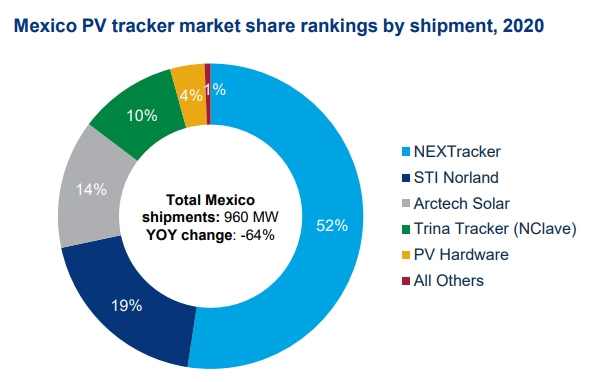 Arctech has ranked as the top 3 tracker supplier in Mexico

“Arctech launched SkyLine II, which is a very stiff tracker that mounts a synchronous multi-point drive mechanism. SkyLine II has a wind stow threshold of 22m/s, the highest in the industry so far, which allows it to track the sun for many more hours when compared with the industry standard. The rigidity provided by the multi-point drive mechanism also allows to safely stow to 0-degree.”. Olvia discussed how Arctech has pioneeringly provided a solution for the challenge on rigidity of tracker brought by larger size modules.

“We are supporting our partners from the very early stages of their projects. With our support our partners can optimize the layout of the projects and increasing the yearly energy generation of the PV plant.” Alejandro Silva Zamora, Regional Director of Chile & South LATAM at Arctech.

Now the Arctech team has been supporting clients in Latam region from five local offices in Colombia, Chile, Brazil, Argentina and Mexico. The team of 40 people with rich experience has been providing engineering, manufacturing and after-sales support for Arctech’s local operation in Latam region, with an intend to source materials for its tracking systems from within the region in response to the favorable policies.

“The solar energy market in Latin America has been growing significantly since the countries have implemented proper regulations and required auctions for regulated clients. According to the Renewable Energy Country Attractiveness Index (EY) Brazil is positioned in eleventh position in the ranking and it is also worth mentioning that the Utility PV market in Brazil will grow by about 2GW in 2022. We are seeing a fever for solar PV projects in DG and Utility in 2022 and 2023, we are expanding our business in both DG and Utility projects, and for Utility we are taking our first steps in order to comply with local content rules in Brazil,” said Aniella Descalzi, the Regional Director of Brazil at Arctech.

“In the upcoming 2022, the Latam team of Arctech will continue shake things up, promote change and react to the shifting demands of users, optimize the energy portfolio and take responsibility for enabling a sustainable future.” Said Jesse Lau, Deputy General Manager of international business at Arctech.