Arctech Solar, the world's leading tracking, racking, and BIPV solutions provider, announced that its two-module-in-portrait (2P) tracker SkySmart II has received UL3703 and CSA certification from Intertek. It marks an important milestone for Arctech Solar, indicating that SkySmart II has gained the access to the North American solar market. As of now, Arctech has inked deals to supply nearly 20 MW of SkySmart II to two projects in the United States. 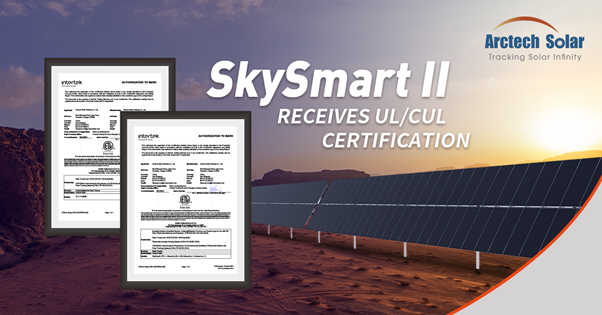 Additionally, the tracker takes full advantage of the artificial intelligence tracking algorithm independently developed by Arctech, ensuring a reliable operation of trackers across a wide range of weather and terrain conditions and increasing the energy yield of solar PV power plants by up to 7%.

Demand for solar power is on the rise in North America. Solar installations in the US are expected to hit 324 GW of capacity over the next decade, more than three times the nearly 100 GW installed by 2020, according to the latest report jointly issued by the US Solar Energy Industries Association (SEIA) and Wood Mackenzie. Thus, the regional solar tracker market is poised to observe tremendous growth for the upcoming decade.

“Customers in North America have long been hesitating to use 2P trackers because they are concerned about the product’s reliability and cost. With the UL/cUL certification and an increasing number of SkySmart II deals, Arctech can reassure customers that the 2P configuration has field-proven quality and the market has huge growth potential," said Guy Rong, President of Global Business at Arctech Solar. “We believe the North American tracker market will witness unprecedented prosperity in the upcoming decade with the popularity of both 1P and 2P trackers. Arctech is proud to be part of the journey as we continue to bring more product innovations and best-in-class services to the market.”

Arctech has been committed to providing superior solar products and services to its valued customers and partners in North America since it set up a branch office in Sacramento, CA, in 2016.

Arctech Solar (SSE-STAR: 688408) is one of the world's leading manufacturers and solution providers of solar tracking, racking, and BIPV systems. In the past decade, Arctech Solar has successfully set up overseas subsidiaries/business service centers in China, Japan, India, U.S., Spain, Australia, UAE, Mexico, Chile, Brazil, and Vietnam. As of the end of 2019, the company has cumulatively installed around 24 GW capacity and completed around 900 projects in 24 countries. Today, Arctech Solar is a reliable partner in the global PV tracking, racking, and BIPV industry. For more information, please visit www.arctechsolar.com.