Arctech, the world's leading tracking, racking, and BIPV solutions provider, announced it has successfully harvested the 57.3MW project in Gujarat, India, marking the company the “4GW club member” in the region. 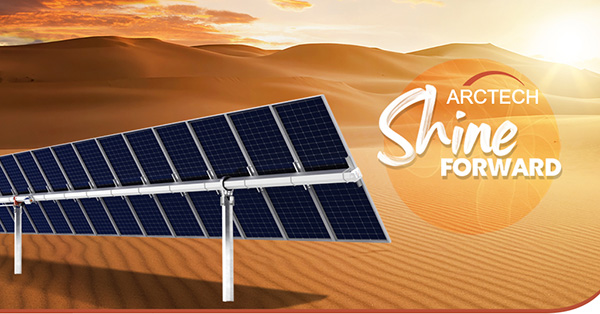 The threats that wind poses to solar installations especially those that utilize single-axis trackers, while not as immediately captivating in damage potential as lacrosse ball-sized hail or sudden, destructive flooding, is still a paramount concern for solar developers, and one that is only growing in import as high-speed wind events become more common and projects expand into areas more prone to high winds.

The horizontal single-axis solar tracking system SkyLine II is equipped with the synchronous multi-point drive mechanism which rigidifies the tracker to the point of enabling 0deg wind stow mode. This is critical to keep allowable pressure levels on the new large format modules and prevent cracking and delamination.

India's government announced it recently scraped the solar anti-dumping probe towards China and the East Asian vendors in the industry. The government levied customs duties of 25 percent on solar cells and 40 percent on solar modules with effect from April 1 this year.

Ernst & Young ranks India as the top market for solar investment, according to the latest edition of its renewables attractiveness index.

Last: Arctech Empowers Green Belt and Road in Argentina with Advanced Solar Tracking Solution
Next: None